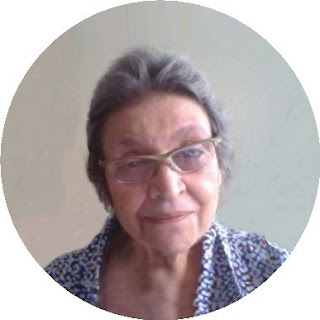 But I am taking a leaf from Tim Gowers' book.  Gowers was the person who initiated the boycotting of Elsevier in 2011. When people asked him why he was singling out Elsevier as a bad  player and boycotting them instead of, say, Springer, he replied that the boycott had to start somewhere and that Elsevier were really egregious in the behavior. Dualizing all these bad things, it seems clear that, if I am going to celebrate several female logicians from Brazil, I might as well start with Andrea Loparic, as she is definitely and clearly very good.

Phil Papers has only four of her papers, so far:

Posted by Valeria at 9:27 PM No comments: 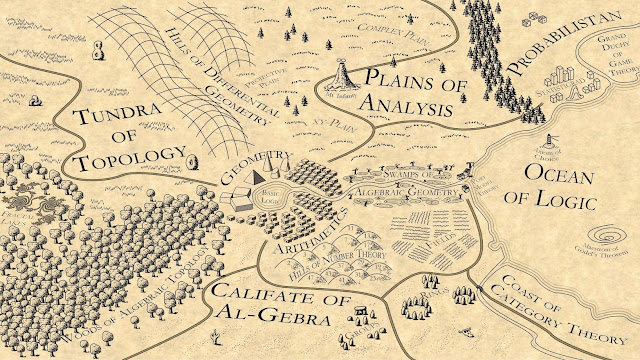 I do love this map from the Zoog video https://www.youtube.com/watch?v=XqpvBaiJRHo.

Yes, Proof Theory does not show up, neither do Recursion or Set Theory, but the Axiom of Choice is a bright lighthouse in the Ocean of Logic, which at least has a long coast (beach, anyone?) of Category Theory.

But I hope we can get a nice map of Logic along similar principles and with a similar aesthetics, one of these days. Andres Villaveces tells me he and his students are building one. Meanwhile here's the announcement of my talk at his seminar. The video of me talking pure CT to Andres Villaveces students about Dialectica constructions seems to have disappeared, the link he sent me goes nowhere now. Sad.

Posted by Valeria at 2:56 PM No comments:

But mine is not working quite yet.

Everything that I have tried ends up missing audio or only recording a few seconds or some other disaster.

Talking at FGV about

Talking in the SuperGroup about Lambek Dialectica categories

Posted by Valeria at 9:04 PM No comments:

What did you do in your Summer vacation? 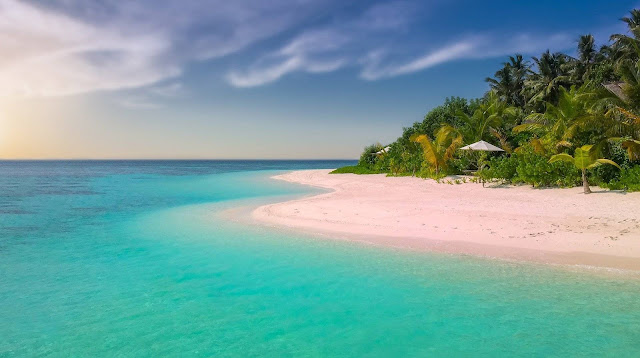 This is kind of silly. It would make more sense to have this list hanging of the homepage of OWN-PT itself, and maybe it will get there soon, but for the time being I need a list of our publications about OpenWordnet-PT and so this is it. Mostly copied from Alexandre's list of publications (thanks for being so organized Alexandre!!!). 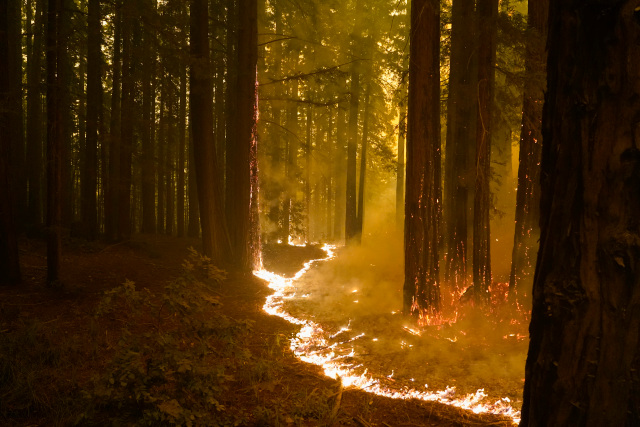 This has been a difficult week: heatwave, pandemic, possible power cuts and to cap it all, wildfires! the possible need to evacuate, the need to prepare go-bags, to find documents and photos. our bags are still sitting by the porch. The wildfires are only 40% contained, as I type this. Very unsettling! and we're the lucky ones: the ones who did not have to evacuate, who only had to consider it.

It took quite a lot of determination to keep making jokes about it. Like the one I made in facebook, stealing from someone I don't know on twitter.

"It’s raining ash in California, forcing us to wear a different kind of mask than we wear for the pandemic when we go buy the generator we need for either rolling blackouts or preemptive outages so we can work from home if we haven’t been evacuated, if we have work or our house hasn't burned down. well, I don't need a generator, I just need some more wine to keep it going!"

But all is fine, thank you! The heatwave has gone away, the air is clear again, there's wine in the house and I've managed to chair sessions at AiML and WBL, and watch lots of interesting talks. I even managed to produce slides and talk for some 20 min on Friday. So we're back to the old worries about all the deadlines missed and all the work not delivered, yet. but hey, this is normal! Wildfires no, they're not normal.
and this picture is from 2016, not now, but somehow is even more frightening that I had no idea it was happening! 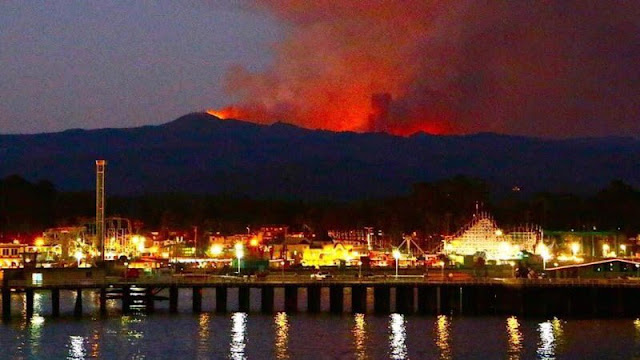 Posted by Valeria at 8:48 PM No comments: 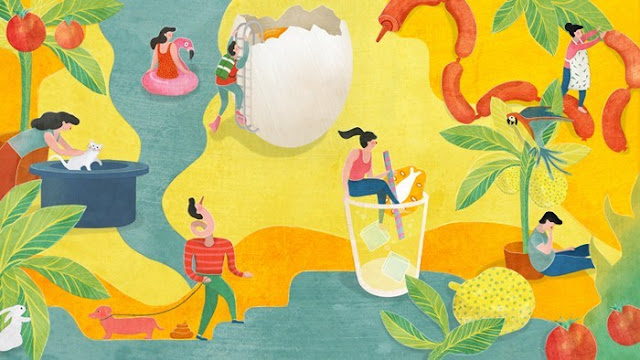 It might be possible to find students and programmers to develop an old dream of mine, I am told. This dream is a project about producing logic from texts in  Portuguese. I have been giving talks about this project since 2010 (paper from 2011). Thus I want to explain (to possible volunteers) what does this project entail, what is the work that we should be doing, and why.
Explaining why we should be doing this work is very easy.
The amount of information published in scientific articles,  preprints, news, blog posts, fiction, as well as unstructured data has increased many-fold in the last few years. A major bottleneck in the discovery of relevant information for business and researchers alike arises when connecting new results with the previously established state-of-the-art. A potential solution to this problem is to transform the unstructured raw-text of the novel information onto structured database entries, which would allow us to reason with this new information in the same way that one already organizes and reasons with the previous content, using Knowledge Graphs. Thus this would allow programmatic querying of the content, checking it for contradictions, checking for new changes, as well as all manners of analytics of this content. The fact that one can do most of this processing in English, but not in Portuguese (or for that matter not in many other languages) should be a reason for concern.  Brazilian science, as well as its industry, cannot progress as well as others, if our native language is not processed as well as others. 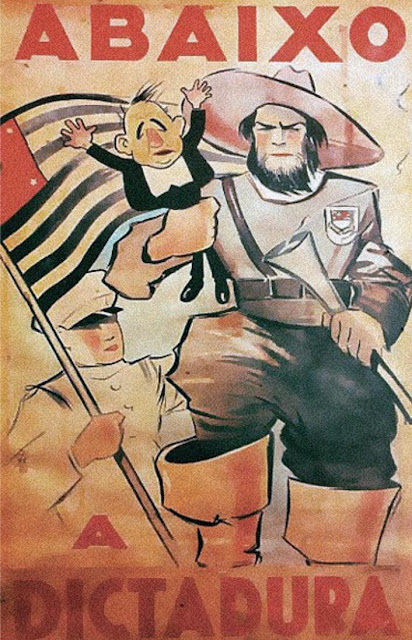 Semantic Parsing Portuguese
Now explaining exactly what the work on a semantic parser for Portugues amounts to, is somewhat harder. The project of transforming unstructured text into knowledge is very hard, language is way too ambiguous and difficult to deal with. While many open-source tools and resources for processing English texts exist, very few can be used for Portuguese. So we describe in parallel what we do have for English and what we need to build for Portuguese.
The project of extracting semantic information from English sentences is very hard. ur best shot can be seen at the moment in the preliminary demo. This prototype, developed by Katerina Kalouli and Dick Crouch, goes over ideas developed when I worked with Crouch at Xerox PARC, but re-implements these ideas from scratch, using new technologies for all software that is proprietary technology of either Xerox PARC or Microsoft. (There is a paper explaining the system and a version showing how this can be hybridized with machine learning systems.)
This new semantic parser project has a pipeline that depends on several other open-source projects: we discuss these several "steps" below.

Steps for Semantic Parser in Portuguese

Semantic parsers for English abound, but we are following a specific line of work that starts with Daniel Bobrow and  Ronald Kaplan at PARC.
1. Grammatical parsing is improving every year. A recent development is the new Stanford system called "Stanza".  Stanza is multilingual, includes Portugues, it is written in Python and has a better (less restrictive) license than the previous CoreNLP Stanford systems. We need to fine-tune it for our experiments.
2. The semantic parser we have in English depends on the grammatical parsing of sentences using the Stanford-Google based project "Universal Dependencies". Actually, it uses "enriched dependencies", we need to check how they behave for Portuguese.
The Universal Dependencies project has been going on since 2016.  This has already a branch in Portuguese, with which I am associated through my work with Alexandre Rademaker and Livy Real, but the corpus we have in Portuguese is small and there are still many issues with the Portuguese Universal Dependencies. These need expanding and possibly some annotation effort to increase the size of the corpus.
3. The semantic parser also depends essentially on Princeton WordNet.  Building up the Portuguese version of the WordNet thesaurus and dictionary has been a much harder task than we had anticipated, but our system (for browsing and downloading) has been in operation since 2012, here's the original description. It is still being constructed or is ``in progress", but it is getting close to the end of its first (translation only) phase.
4. The semantic parser also depends on some version of tool for disambiguation and we have been using JIGSAW (available from GitHub), but this has not been updated since 2012. And this will not work for Portuguese. We need a tool for the disambiguation of Portuguese that can be plugged into this pipeline.
5. The system also depends on a generic upper ontology, for which we are using SUMO  in English. But an upper ontology is not enough to provide the world knowledge necessary for our applications. The project of expanding SUMO into an appropriate ontology for Brazilian culture, a Knowledge Graph for Brazil and its different facets (be they history, culture or geology or tourism, etc) is another major undertaking.
6. Finally, we need a reasoner on top of the representations that the semantic parser produces. This could be an off-the-shelf system like Lean or Isabelle, or it could be an NLI (Natural Language Inference) like the ones produced via neural nets and/or hybrid methods described in this SEMEVAL meeting special issue proceedings.
I need to emphasize that these steps can be done in any scientific or commercial field that one is interested in. We could do it for History, Chemistry, or Mathematics, for example. We could do it to help integrate IoT (Internet of Things) appliances or to help design customer service automated systems. Of course, an application to dialogue will require a further module, a dialogue manager, which orchestrates the possible conversations and actions of the automated system. The different domains should correspond to different Knowledge Graphs.
However, each one of these steps is a considerable amount of work, possibly worth a master thesis, or maybe even a PhD. Putting them all together should also be a major engineering feat. I hope we will find people willing to take up this challenge.
Posted by Valeria at 7:50 AM No comments:

The picture above is what Amazon knows about the books I've edited. There are a few other things, (e.g. special issues of journals), but of course Amazon doesn't sell them, so they wouldn't know about those. Now anyone in the least competent would have their edited books as part of their curriculum and webpage, right? Oh well, I'm failing this test too, so far. Need to add them. 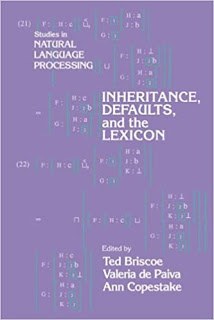 Actually, Amazon also knows about the cover of the last book above, first edition in 1993, re-issued as a paperback in 2006.

Now for special issues, I guess I need to create my own picture.

Posted by Valeria at 5:41 PM No comments:

Valeria
Valeria de Paiva is a mathematician and computer scientist based in Cupertino, CA. She worked as a Principal Scientist at Samsung Research America. Previously she was a senior applied scientist at Nuance Communications, Sunnyvale, CA. Earlier she was at Rearden Commerce and she was a search analyst at Cuil, Inc. in Menlo Park, CA, from May 2008-Sept 2010. Before that she was a research scientist at the Intelligent Systems Laboratory of PARC (Palo Alto Research Center), California (2000-2008). She received her PhD in Mathematics from Cambridge University in 1988 for work on "Dialectica Categories", under Martin Hyland's supervision, and has ever since worked on logical approaches to computation, especially using Category Theory.